After some sleep we decided to go out an explorer Chihuahua. The first mission find a supermarket to buy some things including Peanut butter and a bowl for cereal. After a bit we did find a super market and left with food and other supplies. Outside of the supper market we saw three guys two of whom were carrying soccer shoes. Since one of our goals of the day was to find a game to play we asked them if they were going to play soccer if there was a field close by. They invited us to come play with them they were headed to a game not far from there. So we piled into the coaches mini-van and were off. After warming up, being given socks and ripping up cereal box to use as shin guards we both sat on the bench for the first half and were beginning to wonder if we were going to play at all. At half time we were both given cleats and I was given shin guards. WE both played the rest of the half and it went pretty well. We ended up tying the other team 3-3. Here is a picture of us with them when they dropped us off. 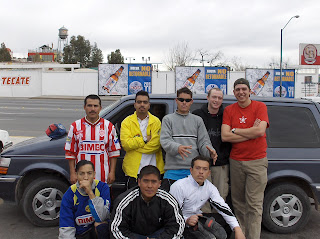 After some food and a little siesta we headed out to see the sights in Chihuahua. That night we had quite an adventure getting to a movie theater by bus but we finally made it and were able to see the rest of 007 it was pretty good. 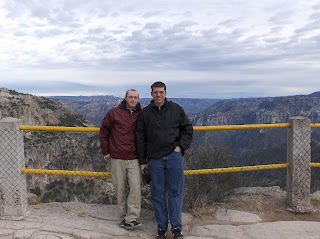 The next day we got up early to go to the train station. We took the train from Chihuahua to Los Mochis through Copper Canyon. It is said to be one of the most beautiful train rides in all of the Americas and it was pretty spectacular. I had taken part of it before. Here is us at one of the train stops looking out over the canyon. Of course the picture doesn't do the real thing any justice. After a 17 hour train rider we decoded to get on the night bus to Mazatlan because there really isn't anything to see in Los Mochis. It was more than 24 hours of traveling but Mazatlan is a very nice beach town although it wasn't warm enough to swim today. Another day in Mazatlan and then it is off to Guadelajara (SP?) To find a Magic tournament for Mark. Who knows maybe I will play as well.