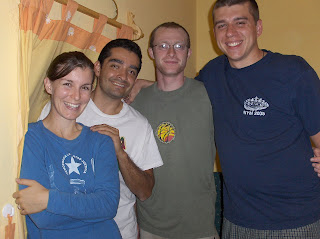 It has been a couple of days since we have posted anything. And there have been many adventures. After Mexico City we headed for Cuernavaca where Mark has a friend from the University of Toronto. It is only an hour and fifteen minute bus ride which is probably our shortest yet. When we got there Mark´s friend Kate met us at the bus station and we went to her house. It was nice to be able to relax in a real house for a little while. It was not something that we have been able to do much. Kate and her husband Arturo both teach yoga in Cuernavaca. This is us in our pajamas just before we went to bed. They were leaving early so it was the last time to take a picture.

The next day we headed out for the ruins called Xochicalco. We had a fun time finding the bus in the local Market. We were reminded of the rule that you should ask three people for directions and if two of them say the same thing go with it but if the all say different things keep asking. We did find the bus eventually and after bumpy ride we made it to the ruins of Xochicalco. They were very interesting. There was a lot more to them than the ones in Mexico City, perhaps because there wasn´t huge city built on top of them. It was pretty neat to see though. We had some discussions about the realness of the pyramids because many of them had been reconstructed so it was hard to tell what was original and what a archeologist's impressions of what it looked like. In fact there is one pyramid there that was reconstructed but there were like 30 big pieces some with carvings on them that didn´t fit so they just left them next to the pyramid. Strange.
That night we got to cook some food. Yeah!!! another first for the trip. We cooked up a bunch of vegetables and added some falafel that they had already made. With some tortillas and bread it was a pretty good dinner. Arturo made some fresh lemonade with lemons from right outside the window of the kitchen mmm good.
NEXT STOP PUEBLA.......................NOT!!!
We were going to go to Puebla but when we got there we decided to not spend a night there and just head straight for Oaxaca.
NEXT STOP OAXACA
at 8:46 PM

you look like a giant in that first picture