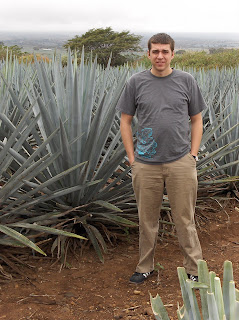 As expected Guadalajara is a very nice city. We did some touristy things here on Friday saw alot of murals and walked around a lot. There are a lot of streets and plazas that are blocked off from cars with little shops and restaurants. We also visited the biggest covered Market in Latin America and it was impressive. We decided to go for Chinese buffet for dinner... and well bad Chinese food in Mexico tastes pretty much like bad Chinese food in the States but it was nice to try something different. Saturday was the fabled Magic tournament. Mark went to go play in the morning and I met him later on in the day. And he won out of 32 player in his bracket he moved up to the final round where him and his opponent decided to split the winnings instead of playing for them. Then he sold the cards he won and made 10 dollars on the day. Yeah!!!!! 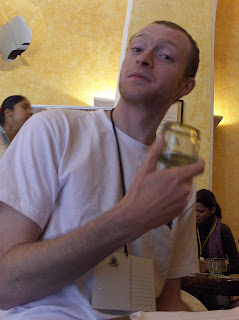 Sunday it was off to Tequila. Yes there is actually a town called Tequila where the drink comes from. We took a guided tour that took us to the fields first. Here I am next to the Blue Agave plant which is what Tequila is made from. Next they took us on a tour of the Jose Cuervo Factory. It was pretty cool to see how it was made. We got to taste some of the plant after it is cooked before they mash it which was actually pretty good kind of sweet. And of course at the end we got to taste the good stuff. MMMMMMM And after three types of Tequila plus a small cup of Margarita we were feeling pretty good.
Monday we leave Guadalajara for Mexico City. We will probably stay a couple of days there and then head for Cuernavaca where Mark has some friends.
at 8:25 PM