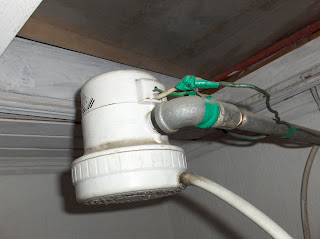 So as I might have mentioned before Xela and the highlands of Guatemala is much colder than Nicaragua. I was sort of expecting a much warmer average temperature. It can be really hot here during the day when the sun is out but when the sun goes down the temperature can drop significantly. It is actually quite pleasant warm during the day but a little chilly at night maybe like fall weather in the northern United States. However, this does mean that hot water is a necessity. It was not something that I remember ever encountering in Nicaragua. It was just so hot that the water was luke warm anyway and you did not want to take a hot shower. But the way to heat up water is what is really fun in Guatemala. Although some people do have gas powered heaters most rely on the electric kind that are attached to the shower head. Not really the best system in the world in my opinion. First of all the obvious problem of electricity coming in close contact with water. As you can see from the picture the wiring is not really up to the best standards and can cause some problems if you happen to reach up with wet hands. The shock is not to bad but it is a little surprising. Second there is the problem of water temperatures. The water is heated as it comes through the little device there. So the less water that is going through the hotter it will be. Depending on the shower head you can have either a very hot shower that drips out or a not so hot shower that flows pretty good. Good thing I do not really like hot showers anyway.
at 6:51 PM

oh man, i love hot showers though! i'm gonna have an issue with this electric shock tepid shower thing

Kate, you should bring a solar shower with you when you go. They work pretty well. You just gotta take your shower during the day:)
Jacob, I hear your parents are visiting you soon! Yay!

Sarah, I heard from Jacob's parents that you haven't been getting my photo emails. What the hell! i've totally been sending them to you! is your address still gishsa etc..?

I just got two yesterday I think it was? So they are coming through now. Thanks:) Glad to know that you were sending them to me. I love them, they are hilarious, and you have a good eye for pictures.